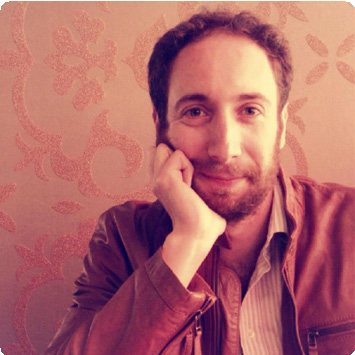 Dr Jonathan Shock is a senior lecturer in the Department of Mathematics and Applied Mathematics at the University of Cape Town (UCT). His research interests include string theory, machine learning, neuroscience and medical data analysis. Over the past five years he has been convening the first-year maths for scientists course.

In 2016, Jonathan was honoured with a UCT Distinguished Teacher Award in recognition of his contribution to teaching. Over the years, Jonathan has applied for grants to meet his teaching ambitions. In 2016, he received a UCT Teaching Grant (with Claire Blackman and Anita Campbell) for a first-year mathematics resources project. With it, they collated resources from different first-year maths courses across the university as a first step in creating a system whereby staff can access and share materials where courses overlap. In 2018, Jonathan received a UCT Teaching Innovation Grant for developing a chapter on complex numbers which received excellent feedback from students.

In 2019, Jonathan was awarded a grant from the Digital Open Textbooks for Development (DOT4D) project to develop a series of chapters for a first-year mathematics textbook, Introduction to University Level Mathematics for a South African Audience. The first of these chapters, ‘Introduction to Complex Numbers’ [1] (co-authored with Mashudu Mokhithi), was published in the OpenUCT repository in 2020.

The Digital Open Textbooks for Development (DOT4D) project in the Centre for Innovation in Learning and Teaching at the University of Cape Town (UCT) provided grant funding and implementation support to 10 open textbook projects in the period from March 2018 – March 2019, as well as implementation support to an 11th initiative. The Open Textbook Journeys series tells the stories of the people driving these initiatives, their teaching and publishing processes and what inspires them to do this work. These case studies were developed in collaboration with and reviewed by the open textbook authors profiled.

Jonathan seeks to open people’s minds and expand their worldviews, and is inspired by the idea of using an abstract subject like mathematics to do so. This case study tells his story.

This case study draws on:

What is the problem Jonathan is trying to address?

Feedback from Jonathan’s first-year maths course has revealed to him a number of prevailing problems that he is seeking to address with his open textbook. First, the R800 ($55) price tag for the currently prescribed textbook is too expensive and creates a high cost burden for students. Second, the current textbook is orientated towards an understanding of mathematics deriving from the Global North. Third, the textbook is not calibrated to the specific needs of localmatriculants-turned-varsity-students who would benefit from more exercises and assessments in the text.

Jonathan aims to meet these challenges by providing a low cost (free), locally relevant open textbook that can function as a ‘roadmap’ to help students transition from high school to university-level courses and beyond. This forms part of his exploration of alternative teaching practices which present an interdisciplinary and localised approach to mathematics that includes history, culture and linguistics.

Textbook conventions in the discipline

Jonathan indicated that, in his department, the choice of textbook was made by the course convenor, but that this was often shaped by historical precedent. It was easier to simply re-use the previously used textbook because changing textbooks required a change to the entire course approach, as it dictates curriculum. Jonathan’s textbook development process structures the content to match existing course requirements.

Jonathan submitted a proposal to the DOT4D grant programme in collaboration with his departmental colleague Dr Claire Blackman. Their collective project, ‘Mathematics Textbooks for South Africa’, had two main branches, both of which were aimed at addressing the accessibility of mathematics education for undergraduate students at UCT.

Jonathan was responsible for the first branch of the project, which was focused on the major first-year Mathematics and Applied Mathematics course, in which the same textbook had been used for over a decade.

As such, the aim of this project was to develop a book at UCT which would be open access, multi-format (online and print), inclusive (culturally and linguistically) and tailored for the South African school leaver. By writing a book in-house, Jonathan envisioned that all of the above problems could be addressed, and by working collaboratively with students, he hoped to create a sense of ownership regarding their mathematical knowledge and materials.

Jonathan adopted a ‘lead author as editor-in-chief with student and colleague co-authors’ authorship approach, in which different components of the textbook would be developed concurrently through varying levels of collaboration with colleagues and students.

In his proposal, he described how student feedback and engagement would form a vital part of the project. In the past, efforts had been made to work closely with former Mathematics and Applied Mathematics students (in particular those in second and third year) to improve homework questions, and Jonathan believed that it was important to have the perspective of students to create something which was appropriate for their level. In addition, he believed that it was particularly important to work closely with students when developing the first chapter of the book so that the bridge between school and university was engineered correctly. This approach involved discussions with students to engage them on what they found to be the hardest aspects of their transition.

The aim of this project was to develop a book at UCT which would be open access, multi-format (online and print), inclusive (culturally and linguistically) and tailored for the South African school-leaver

In Jonathan’s original grant proposal, he outlined a one-year time frame for the production of his open textbook (March 2019 – February 2020).

Jonathan engaged two student assistants who played different roles in the project’s content development process. One was responsible for familiarising themselves with PreTeXt [2], the XML-based authoring tool which was used in the chapter authoring process.

The other’s role was to collate a bank of useful questions which could help students transition from high school level to what was expected of them in the first few weeks of university, focusing on topics they typically struggled with. The students’ participation was motivated by their desire to improve the student experience for others and the shared ambition to try and create a growth mindset.

In developing the ‘Introduction to Complex Numbers’ chapter, Jonathan wrote up a LaTeX [3] document relating some of the basic ideas of what university mathematics encompassed, and then co-authored (with colleague Mashudu Mokhithi) notes on complex numbers which included discussion of issues relating to languages and number systems around the world. Following this, one of the students put the notes into PreTeXt so that they could be converted into PDF and HTML.

At the conclusion of the DOT4D grant period in February 2020, the team had a working document of roughly 100 pages covering much of the underpinnings of thinking about university mathematics, as well as a comprehensive set of notes on complex numbers which could be used by the 2020 intake of students in the Mathematics and Applied Mathematics course.

Jonathan believed that the interaction with the student assistants in the content development process had been a valuable part of the process, particularly because their collaboration with the project helped enrich their first-year experience. They also emerged with new skill sets. One became proficient in using XML markup language, which would be useful in other maths projects. The other had been given an opportunity to think more deeply about mathematics pedagogy, which was valuable in terms of opening up his future career opportunities and ambitions.

Interaction with the student assistants in the content development process had been a valuable part of the process, particularly because their collaboration with the project helped enrich their first- year experience

Jonathan has adopted an ‘author as self-publisher’ approach towards the publication of his open textbook.

In collaboration with one of his colleagues, he typeset and produced the first chapter (of the envisioned open textbook),‘Introduction to Complex Numbers’, which was published in the OpenUCT repository in April 2020.

One of the key features of PreTeXt is it allows for the easy inclusion of runable code within HTML so that students reading the book online can check answers, run examples and interact with the textbook.

Jonathan and the student assistants developed all the material for the introductory chapter, thus there were no third-party copyright concerns that had to be navigated.

The ‘Introduction to Complex Numbers’ chapter is published under a Creative Commons Attribution 4.0 International licence.

Alongside Jonathan, two other lecturers helped oversee this project. First-year students were also asked to provide feedback, highlighting gaps in explanations or errors in the writing. This was seen as an ongoing aspect within the project. In the past, the project’s team had found that, because there were so many students involved in the process, any errors were picked up very quickly and a new version could be produced almost immediately. In addition, Jonathan employed professional proofreaders to improve the quality of the work being produced.

In terms of sustainability, Jonathan believed that, because the project was producing the textbook in a modular fashion, each chapter would build on the previous ones and that motivation to complete the textbook would grow as more chapters appeared. He envisioned this would be in progress for at least two years, but that design of early pilot chapters, such as the ‘Introduction to Complex Numbers’, would aid the project in recognising what the main hurdles of production would be.

First-year students were also asked to provide feedback, highlighting gaps in explanations or errors in the writing

At the end of the grant period in February 2020, Jonathan was in the process of finalising the ‘Introduction to Complex Numbers’ chapter for publication. Despite some delays in the publication of the final version, the notes that formed the foundation for this chapter could still be used in the first semester of the 2020 academic year.

Apart from one student dropping out of the project’s development team, Jonathan experienced few hurdles in his open textbook journey and expressed that there was very little he would have changed about the process. He felt it turned out to be productive and successful, with many benefits experienced by the various collaborators involved in the project as well as the broader student community.

In addition, Jonathan expressed that, ‘this has been very useful in terms of being able to dedicate time to writing. While I was not paid directly, having the project was itself a very good motivator to get something finished in a finite amount of time’.

Overview of the original budget submitted to DOT4D as part of 2018 grant application, with actual expenditure.